September 19, 2017
Luke Muelhauser at the Open Philanthropy Project has a thought-provoking post arguing that most of human history is roughly the same plodding along in boring conditions until the industrial revolution, in which productivity exploded, countering what people have gotten in history. You can see a visual illustration of this in the graph on the right.

I think this gets a whole lot right about the way history has gone. It irrefutably gets a lot right when you talk in terms of sheer magnitude of living conditions: the amount of good things multiplied many times over in a short period of time.

As one of the commenters pointed out, there could still be importance to earlier eras of history–potentially as much importance as in post-Industrial Revolution history. The reason is this: if our interest is in relative progress, then one man's flat line is another man's explosion. If human progress followed an exponential function, then when an "explosion" happens depends on the scale. There's an illustration of this on the left.

Indeed, the original post contains a graph suggesting that things started to take off around the Renaissance and Enlightenment in the right scale: 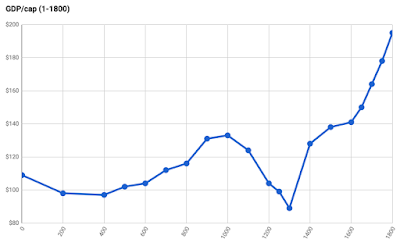 It turns out, some commentators crunched the numbers and found that there is more evidence to think that the course of human history really did change in kind and not just degree in the industrial era. If it changed in degree, then the change of degree is sharper than exponential, and history follows a "double exponential function" rather than an exponential one.

One thing that worries me, though, and that makes me think the course of history could be closer to exponential than we think, is the question of how accurate measurement has been–from material goods to war statistics–over the course of human history. Error likely increases in magnitude the further back you go, an exponential curve could easily appear more horizontal in the past, as the growth might still have been undetectable.

A number of "big history" type books (Guns, Germs, and Steel; Better Angels of Our Nature) do seem to suggest there was steady progress over the course of human history. Maybe I'm just having disconfirmation bias, or maybe there's reason to be slow to conclude that all of this history is so much flatter than it seems.